During the First World War, considerable losses in battles were associated with improper care for soldiers. The highest casualties occurred during humid and cold weather. During World War II, German officers agreed that trench foot was a more serious problem. The Germans made a concerted effort to ensure that all soldiers were aware of the danger and put in place precautionary measures to keep their feet in good shape. 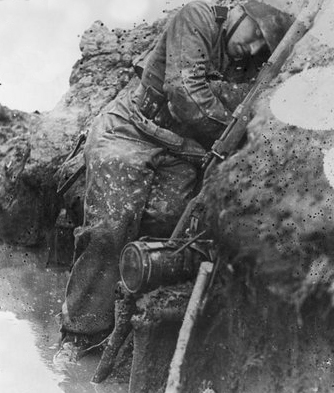 Trench Foot is a medical condition caused by long-term exposure of the feet to humid, unhygienic and cold conditions.
Among the supporting factors of trench foot formation are too narrow shoes, non-agility, reduced hygiene, humidity and temperatures up to 16 ° C.

The first stages of the trench foot can occur in as little as 13 hours.

Affected legs may be numb, afflicted with erythrosis (redness) or cyanosis (blue discoloration) due to poor vascular supply, and the legs may have a decaying odor due to the initial stages of necrosis.
Advanced ditch foot often includes blisters and open wounds that lead to fungal infections. If the trench foot is not treated, it usually leads to gangrene, which can cause amputation.

All soldiers as well as the leadership were carefully instructed and in their weekly training courses constantly reminded them of what needed to be done to avoid unnecessary trench feet and frostbite.

In addition to the training provided by the medical staff, it was the responsibility of the officials to ensure that the necessary preventive measures were taken. Men were also responsible and could be punished for gross negligence in carrying out preventive measures.

Foot checks were supposed to be done every 48 hours, but in combat conditions it was often much more.

The Taschenbuch für den Winterkrieg (Winter Fighting Handbook) has provided soldiers with the following instructions for protection from cold weather, most of which concern foot care:

The dispensing of shoes was to be carefully supervised by supply sergeants, who were told that it was necessary to dispense sufficiently large shoes. Some of the men preferred a footwrap over a second pair of socks. The footwraps was a square or rectangular piece of cotton (summer variant) or flannel canvas (winter variant) that was wrapped around the leg.

Footwraps were more comfortable than repaired socks. They were easier to wash and there was no problem with the size after washing, as if the socks had shrunk. However, it took men quite a long time to acquire skills in their use.

A sock exchange system has been introduced in several divisions of the motorized infantry (Panzergrenadier). Dry, clean socks were sent forward with batches and wet socks were picked up to be washed, dried and sent forward again. Panzergrenadier officers stressed, however, the need to still have another couple in case the benefits were delayed. This system was by no means valid for everyone, and most officers had never heard of it, but those who used it highly praised it.

The typical size for footwraps is about 40x40 cm or for a rectangular model 40 cm × 80 cm. There were two variants of summer and winter footwraps. While summer footwraps are usually made of a thin fabric of linen or cotton, footwraps are made of cotton flannel or a mixture of wool and cotton (50:50).

Footwraps should not have a seam that could be rubbed and pressed, so they cannot be sewn together in several pieces and are not sewn along the edges.