BLOG Food on the front

Food on the front

The food supply system at the end of 1944 was largely the same as at the beginning of the war (not improved and not modernized). Food rations for soldiers consisted mainly of packaged products from the company or field kitchen, which cooked hot food for soldiers daily. 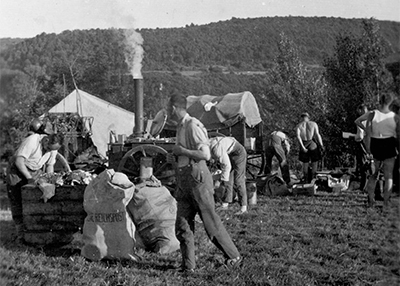 The most well-known problem with hot food from field kitchens was distance, this was most evident in the Blitzkrieg combat tactics, when soldiers progress quickly and field kitchens do not manage to disassemble, cook food and deliver it to soldiers.When the food rations came close to the front, they were transferred to food containers or to the mess kit, which the soldiers picked up and distributed to the front line of the front.

This way of transporting food to the soldiers caused problems - the food came cold, little came or did not come at all, and the soldiers starved for several days in a row. Other foods such as sweets, bread, potatoes, fruit, coffee, etc. placed in a blanket, the blanket curled up for easier transfer.

The solution to this situation was the introduction of food rations (Iron rations), which were distributed to soldiers when it was likely that food could not be delivered from field kitchens. These rations were similar to American food intake, but never reached such quality, and factories could not pack and distribute such quantities.

The German army had set ration food levels for the army. These levels are used whenever possible, but often it served only as a help in food distribution. As some foods were unavailable and rations were always made from available foods that were currently in stock. Therefore, it is possible that some packages were composed of different foods.

The daily ration (Portionsatz) is the amount of food consumed by one man per day.

It consists of three meals:

The headquarters has developed a plan specifying the maximum quantity of each ration that can be delivered. Doses depend on two factors:

For this purpose, they use 4 classes:

Class I (Verpflegungssatz I) - units determined to fight, for units recovering from combat and for units stationed in Norway.

Sickness cases can belong to any of these classes depending on the severity of the cases.

The most important foods type in the ration classes:

The German soldier most often also obtained food from gardens, fields or from the kitchens of people (who fled their homes). Therefore, you can see in most war photos a lot of vegetables, fruits, bread, smoked meat, canned food, which were not commonly used as official rations for soldiers. 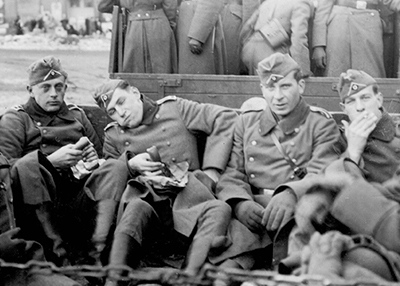 So you don't have to worry about using unpackaged food to reenactment event. Just wrap food in a towel or Zwiebackbeutel (Breadbag) or a piece of cloth and put it in a blouse pocket. Where soldiers most often wore everything from personal needs (sewing supplies, ammunition, knives, etc.) to food (various crackers, nuts, bread, etc.) or other small items that a soldier could consume during guarding or attack. Because during silent attacks, soldiers often did not carry a breadbag (Brotbeutel) to eliminate the sounds of movement.

The options for eating for a reenactment event are various. Whether ration food (that you received from the field kitchen) or food obtained from the enemy or food from the civilian population.

If you have found a mistake in the text or wrong information let me know about it on Instagram or email via the contact form.